Up the coast north of Puerto Vallarta, just a hop and a skip from Sayulita, is the small town of San Francisco, affectionately referred to as San Pancho. We have watched the growth of this village over the years from when an excursion to San Pancho almost guaranteed being the only gringos in town.  Home ownership by foreigners in the area has made a big difference to everything from numbers of bars to conditions of roads (though the latter tends to get less attention than the former.)

Accommodations are plenty, contrary to when we found finding a place to stay could be frustrating in both low and high season. These days there are hotels ranging in price from nearly $200/night to as little as $55. Airbnb and their competitors have become increasingly popular and easy to book, most kid friendly and many accepting pets. Hostel San Pancho costs as little as $37 US a night. San Pancho is appealing to the well-traveled tourist, as well as newcomers to the beach/jungle scene. Airport transportation is easy.

At one time there was a small university in this village; The University of the Third World was the endeavor of Mexican President Luis Echeverria, who built a vacation home in San Pancho in the 1970’s and had his own personal vision of the future of San Pancho. With the new airport in Puerto Vallarta in the 70’s, holidays from Mexico City could be pulled off with ease and comfort.

Centro Comunitario Entreamigos may have been what President Echeverria was dreaming of decades ago. In 2006, an American woman, Nicole Swedlow began this non-profit learning center, which eventually gained support from the state government, rebuilding their site in a local warehouse. With over 700 classes offered and a library that boasts thousands of Spanish and English books, there’s little that can’t be learned by children and adults alike in fields as diverse as technology, sports, art and circus skills. The circus school, Circo de los Niños, founded by the directors of Cirque du Soleil is also housed at Entreamigos; they put on shows for locals that are breathtaking and fantastic.

La Patrona Polo and Equestrian Club draws people to San Pancho and maintains the goal of training polo players, supported by the Mexican Polo Federation, with an accent on women’s polo. This polo club presents a competitive learning environment in a world class facility.

Once the simple residence of a handful of Franciscan priests and a small population of landowners of immense agricultural estates, San Pancho is no longer a sleepy little village north of Puerto Vallarta. It continues to grow as a developing community with rich educational values and a varied, enthusiastic population. 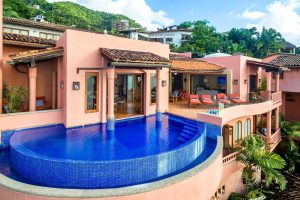